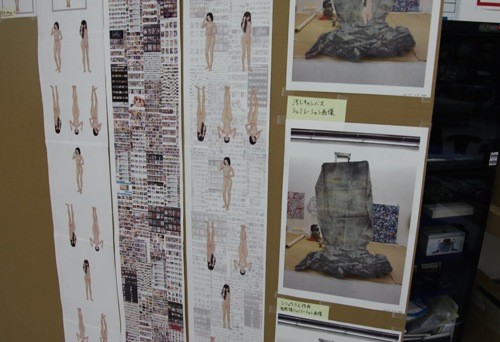 Takashi Murakami has said that his goal is “to become a living example of the potential of art.” And given the extraordinary achievements of his career to date, it is safe to say that he is well on his way to realizing this ambition. He has spent a long and varied career challenging the distinctions others have drawn: between high and low, East and West, art and commerce. He is an artist, curator, product designer, theorist, and entrepreneur, and he coined the term “Superflat,” which has come to define the challenging questions he and others pose to the art community through their work.

Murakami was born Feb. 1, 1962 in Tokyo Japan. He attended the Tokyo University of the Arts, receiving a Ph.D. in Nihonga, a traditional style of Japanese painting. He had always been drawn to Japanese anime and manga, however, and he soon wanted to explore more contemporary styles, subjects and media. He branched out into performance art and conceptual works and created his own pop icon, Mr. DOB.

In 1994, Murakami traveled to New York City for a year as part of the PS1 international studio program. He started a small studio and began to develop concepts that would shape his career, inspired by the work of Western artists such as Anselm Kiefer and Jeff Koons. Murakami drew on similarities between the flat composition of traditional Japanese painting and the two-dimensional forms and bold, striking imagery of anime and manga to build the artistic movement known as Superflat. The term also served, to him, to define post-war Japanese society, in which he differences in social class and between high and low art had been “flattened.”

In 2000, he drew on his Superflat theory to curate a show of the same name for the Museum of Contemporary Art in Los Angeles, expounding on his ideas in the exhibit’s catalog. He curated further shows, “Coloriage,” in 2002, at the Fondation Cartier pour l’art contemporain, Paris, and “Little Boy: The Arts of Japan’s Exploding Subculture” in 2005 at the Japan Society, in New York. Murakami presented “low” or subcultural art to the “high-art” market. He then repackaged his “high-art” works as merchandise such as plush toys and T-shirts, questioning their elevated status and making them available at more affordable prices.

In 2003 Murakami gained recognition and notoriety by calling into question the distinction between art and commerce in a collaboration with Marc Jacobs, artistic director of the Louis Vuitton fashion house. His celebrity status grew with collaborations with Kanye West and Pharrell Williams. With this increase in fame came a greater market value for his work, with prices rising to the millions.

Murakami also devoted himself to the promotion of Japanese art and artists. In 2001 he founded an art production company, Kaikai Kiki Co., Ltd., with offices in both Japan and Brooklyn, N.Y. This company allowed Murakami to help many young artists gain international exposure. He mounts exhibits, produces and sells merchandise, and organizes a biannual art festival and convention in Tokyo. In 2007 ©MURAKAMI was mounted at the Museum of Contemporary Art in Los Angeles, and it subsequently traveled to a number of other major museums, including the Guggenheim Museum in Bilbao, Spain, in 2009. This retrospective exhibit of Murakami’s artistic activity included not only paintings, sculpture, film, and installation works but also Kaikai Kiki merchandise and fashion products for Louis Vuitton.